How I can connect my ArgoCD/OpenShift GitOps deployments in each managed cluster, and have full visibility, control and management of my Argo Applications in single pane of glass? How I can manage all my ApplicationSets in the different managed clusters that I have across public and private clouds?

From ACM version 2.3 you can manage ApplicationSets from ArgoCD / OpenShift-GitOps, having a single pane of glass to manage all of your GitOps Applications in a scalable way.

among others features that are interesting for multitenant clustering.

Prerequisites for integrate OpenShift GitOps and ACM with Managed Clusters

After registering, we can deploy applications to those clusters using Application and ApplicationSets managing from the ACM Hub Applications. Then, we can set up a continuous GitOps environment to automate application consistency across clusters in development, staging, and production environments.

NOTE: Only OpenShift clusters are registered to an Argo CD or OpenShift GitOps operator instance, not other Kubernetes clusters.

This enables the Argo CD instance to deploy applications to any of those ACM Hub managed clusters.

As we can see from the previous example the placementRef.name is defined as all-openshift-clusters, and is specified as target clusters for the GitOps instance that is installed in argoNamespace: openshift-gitops.

On the other hand, the argoServer.cluster specification requires the local-cluster value, because will be using the OpenShift GitOps deployed in the OpenShift cluster that is also where the ACM Hub is installed.

Once we have the integration between OpenShift GitOps and ACM is enabled though the GitOps Cluster CRD in ACM Hub, we have the possibility to deploy ApplicationSets in ACM Hub directly, managing in a single pane of glass all the ArgoCD applications.

On the other hand we will also benefit from the features of the different generators of ArgoCD ApplicationSets.

Using these generators (specially the Cluster Decision Resource Generator) we can deploy several applications from a single repository in different clusters, leveraging from the ApplicationSet for apply the application manifests for the different objects in the repository in each managed cluster. 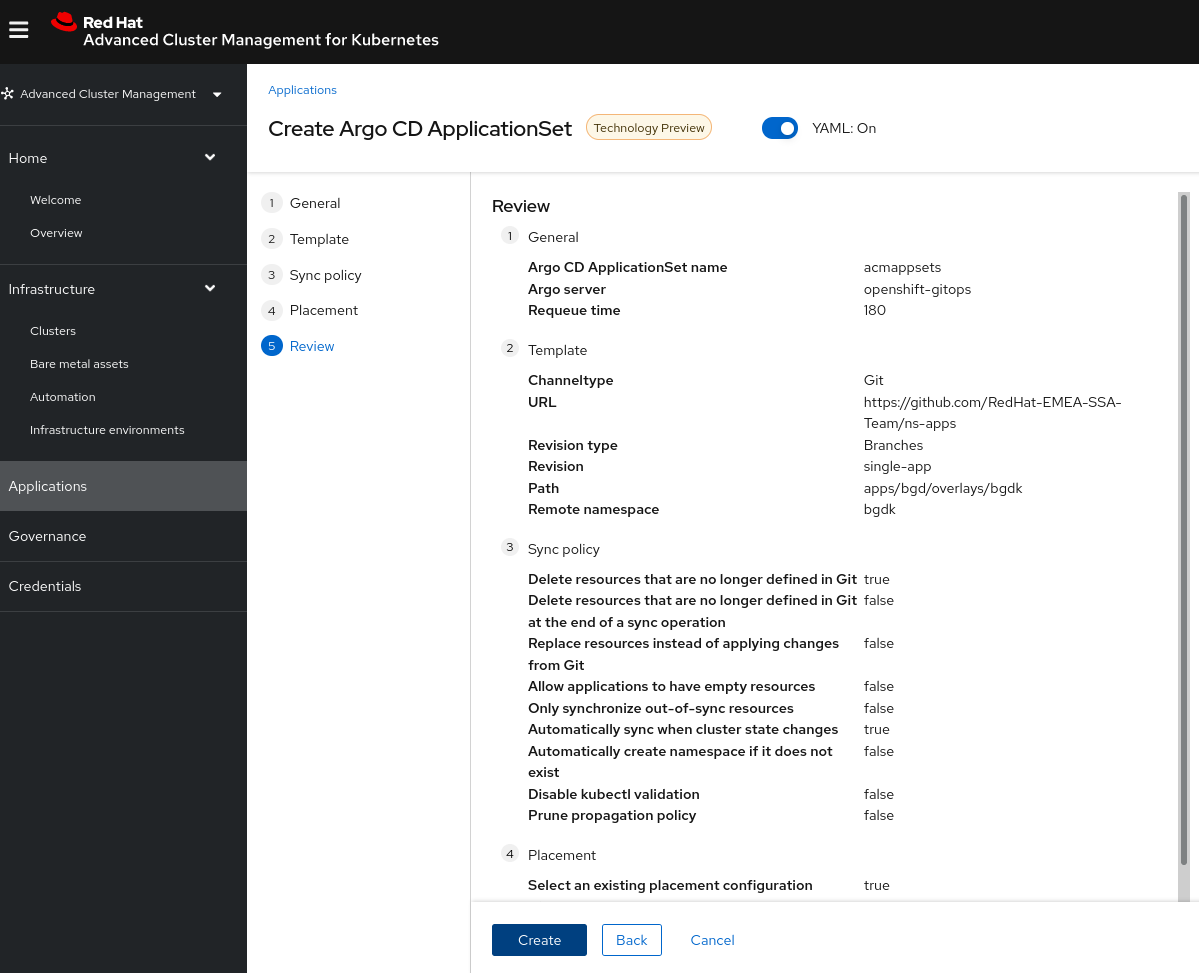 as we can see is assigned to two different Clusters, bm-germany and local-cluster that will be where the applications will be deployed managed by the ApplicationSet 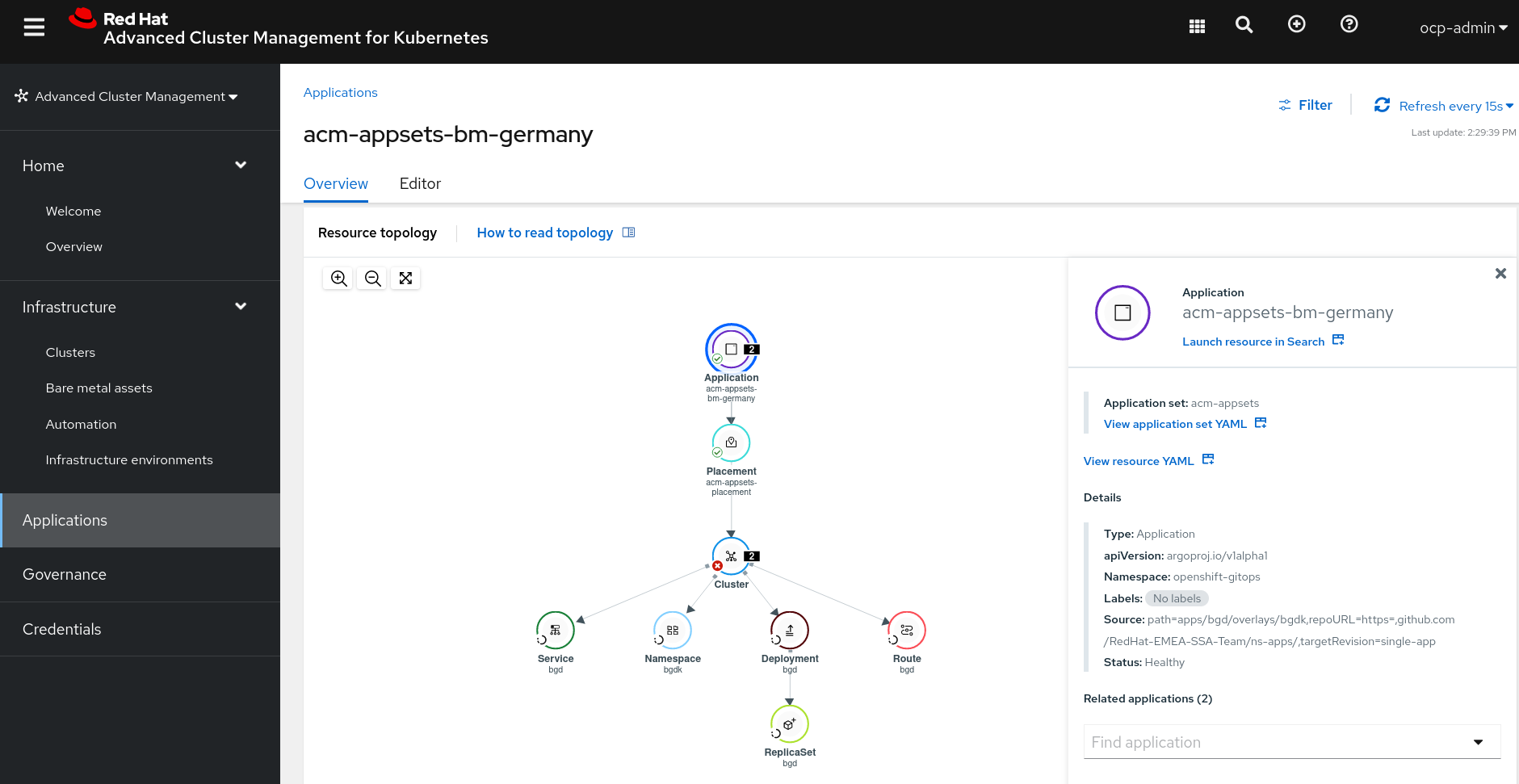 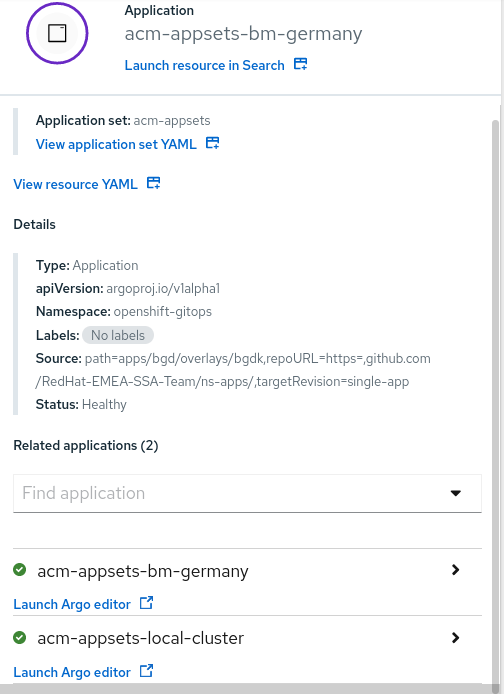 as we described before two ArgoCD Applications are generated by the ApplicationSet matching the Placement defined.

NOTE: check the destination that are pointing to the different managed clusters defined in early steps.

these are generated automatically and managed by the GitOps CRD generated in the ACM Hub, that corresponds with the Managed Clusters.

And with ends this blog post about OpenShift GitOps, ArgoCD ApplicationSets and ACM!